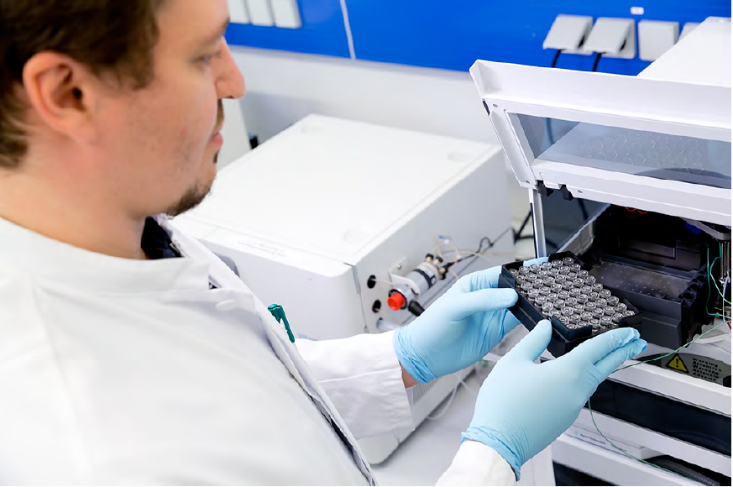 In the late 1990s, this program focused on the analysis of cocoa flavanols–from fresh beans to finished products. Given the complexities of these natural molecules, this analysis hasn't been without its challenges; it has required the ability to build upon published approaches, extend analytical capabilities and use High-Performance Liquid Chromatography (HPLC) to offer a more detailed view into the discrete flavanol forms in cocoa.

The 1999 method: Our first analytical method

Published in 1999, the first analytical method we developed enabled the analysis of cocoa flavanols in a consistent way, which opened the door to our clinical research program that's been ongoing for more than 20 years.

As a research method, this analysis has been extensively used to quantify the flavanols in a range of cocoa products used in our global research program. The ability to consistently analyze cocoa flavanols also allowed for the study of factors in conventional cocoa handling and processing that typically destroy cocoa flavanols. This led to the identification of key steps in cocoa handling that could preserve flavanol content and the development of our proprietary COCOAPRO® process.

While this 1999 method was pivotal to research, it did have limitations in routine use, including quality control (QC) testing. The solvents used, the lack of a commercially available standard and the long-run times limited the transferability and reliability of the method. As research emerged on the health benefits of cocoa flavanol consumption, we needed a new, more reliable and readily transferable method to advance research and create a path for product labelling. Working in partnership with a global network of labs and AOAC International, an association that sets standards for methods of food analysis, this next generation method was published and formally recognized as a First Action Official Method of Analysis SM in 2012.

In the eight years since the publication of the updated method in 2012, performances drifted however, the gap in assuring consistent method performances between labs remained. The length of time required for analysis also limited productivity. However, in 2020, this analytical work took another step forward. Employing an updated analytical approach, specifically a new HPLC column, as well as a standard reference material, created in partnership with the National Institute of Standards and Technology, U.S. Dept. of Commerce (NIST), the updated method offers dramatic improvements in accuracy and precision. This latest method addresses the key limitations of its predecessor and makes critical analytical advancements. In April 2020, this updated method was accepted by AOAC’s expert panel as a First Action Official Method of Analysis SM ( 2020.05) The standard for cocoa flavanols accompanying this method is soon-to-be commercially available through NIST.

The 2020 method achieves a more accurate way to measure and consistently report cocoa flavanol levels. One consequence of changes in methods can be a change in reported values. This is the case for this analysis, as well.  From the original measurement method published in 1999 to this latest paper, the overall accuracy and precision of the measurement has consistently improved.

Today’s method is less subject to drifts and interferences, and as a result, the reporting of cocoa flavanol content is clearer and more accurate. However, it's important to recognize that the levels of cocoa flavanols in products have not changed, rather the approach to measurement has.

The conversion table below allows comparisons between the results of flavanol content analyses from papers published before and after the introduction of the new method:

When flavanols are absorbed, they're extensively metabolized, but are different from the forms of flavanols found in the food itself. The ability to measure flavanols in the blood following the consumption of a flavanol-based product is important to understand the effects of flavanols, including their safety. Understanding metabolism has also enabled the development of better tools for assessing dietary intake.

In nutritional research, the most common tool for assessing dietary intake is a dietary survey, in which an individual recalls and reports what he or she has eaten over the past 24 hours to one week. While common and easy to measure, this approach has significant recognized limitations in its accuracy. Knowing what people are actually consuming in their diets is foundational to conducting nutrition research and making dietary recommendations.

In 2016, our scientists published a comprehensive study on the metabolism of the key bioavailable flavanol in cocoa: (–)-epicatechin. The study showed that (–)-epicatechin was rapidly metabolized into more than 20 different compounds after it entered the human body. This process highlights the potential limitations of cell culture research that only uses (–)-epicatechin as a variable and doesn't account for metabolism and doesn't reflect what's truly happening in the body. Understanding the effects of metabolism allows researchers to establish a causal relationship between what is in the food, what's in the body, and ultimately, the benefits that flavanols can offer. With the ability to measure how much epicatechin is consumed, it’s now possible to study, on a large-scale, the relationships between epicatechin intake from a range of dietary sources and health.

Understanding how (–)-epicatechin is metabolized gives important insight into how flavanols may work, as well as provides information on safety. For example, flavanols are extensively glucuronidated, sulphated, and methylated avoiding metabolism through enzymes like cytochrome P-450, a collection of enzymes important to the activation of a number of drugs. Knowing how flavanols are metabolized and what forms are present in the circulation over time helps us to study and ultimately understand how flavanols may work in the body and can give insights into potential drug-food interactions.

Not as often discussed, these investments in flavanol analytics – from the bean to the human body – have been critical to the research on the health benefits of these natural compounds. This research will continue to unlock new discoveries and could lead to product labelling and dietary recommendations that can support people’s health as they age.