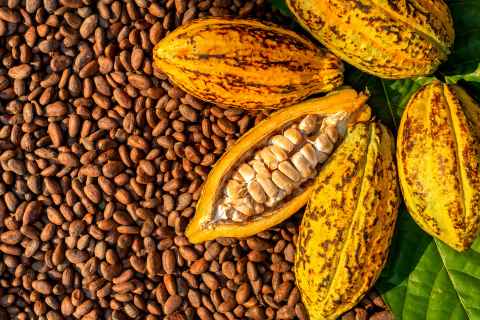 By: Javier Ottaviani, Director of the Mars Edge Core Laboratory at UC Davis

My research interest is investigating the role of flavanols in healthy aging and vascular health. Over the years, I have become more focused on (–)-epicatechin, a widely studied molecule shown to be the critical, biologically active component of cocoa flavanols.

Cocoa flavanols refer to the specific mixture of flavanol molecules found in cocoa, which includes single molecule flavanols called epicatechins and catechins. Each of these molecules can be arranged in space in two different manners, being classified as ‘plus’ or ‘minus’ forms. While all these forms of molecules are found in cocoa flavanols, the ‘minus’ form of epicatechin (written as (–)-epicatechin) is the most abundant. You can read more about these forms here.

The difference between these forms of flavanol molecules may seem subtle, but it accounts for significant differences in how they interact with the human body.

Research I conducted with colleagues at the University of California Davis and Mars showed that (–)-epicatechin reaches the highest concentration in the body and has the most potent effect on blood vessel dilation and blood flow, when compared to the other three forms single flavanol molecules.

Shining a light on how (–)-epicatechin is processed in the body

Consuming (–)-epicatechin is now linked to various cardiovascular and cognitive health benefits by a significant body of evidence.

In 2016, we published research on what happens to (–)-epicatechin after intake and how our body may transform this molecule. The results were highly informative. We found that (–)-epicatechin is rapidly metabolized into more than 20 different compounds (called metabolites) after it enters the human body.

Our research showed that none of the (–)-epicatechin forms found in plants appeared in the bloodstream or urine. This tells us that (–)-epicatechin itself could not cause these health benefits directly but, instead, one or more of its metabolites must be causing the improvements in cardiovascular function observed in previous studies.

Subsequently, we demonstrated that intake of (–)-epicatechin and (+)-epicatechin results in a different profile of metabolites present in humans. This difference could explain the varied biological effects between the two epicatechin forms found in nature.

The abundance of (–)-epicatechin in cocoa beans explains why cocoa flavanols have become so interesting to health and nutrition researchers, including myself.

I must, however, caution that many cocoa products will not have these health benefits - cooking and processing foods can change the amount of nutrients they retain. The same goes for cocoa. While unprocessed cocoa has these health-improving compounds, fermenting, drying, roasting, and alkalizing it can destroy (–)-epicatechin or convert it to (–)-catechin - one of the related forms presenting a lower biological activity and absorption than (–)-epicatechin.

Because of this, the content of (−)-epicatechin varies among different cocoa-derived products, depending on how they have been processed. Therefore, most cocoa products are not rich in cocoa flavanols. The USDA has a useful database if you want to know more about the amounts of flavanols and (–)-epicatechin you can find in certain foods.

That said, consuming flavanol-rich foods that are fresh or carefully processed as part of a healthy diet can offer the beneficial effects of (–)-epicatechin and help to support heart health