How analytical methods underpin insights into the benefits of flavanols 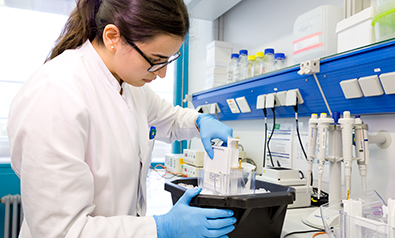 Flavanols and procyanidins are plant-derived bioactives found in foods, such as apples, nuts, grapes, berries and cocoa. These bioactives are widely researched for their benefits on human health, including cardiovascular and cognitive performance.
To effectively research how flavanols and procyanidins impact human health, it’s necessary to identify, analyze and measure their presence in foods and in the body. However, these bioactives are structurally diverse and complex compounds, which makes this very difficult. Together with my research colleagues at Mars Edge, I work to develop analytical methods to measure and accurately report on bioactives to help further these scientific discoveries. Two recent studies looking at these new methods were recently published in the journals, Food & Function and Scientific Reports.

Ultimately, these methods will help the nutrition and biomedical research community further investigate the benefits of these bioactives for human health.

My Mars Edge colleagues, Dr. Ugo Bussy and Dr. Catherine Kwik-Uribe, and I developed and validated a new method to quantify flavanols and procyanidins, using high performance liquid chromatography and tandem mass spectrometry (HPLC-MS2). This method is a complementary analysis tool to AOAC2020.05, the scientific method for measuring flavanols and procyanidins in cocoa products, that was recently accredited by AOAC International.

This new method allows us to detect the flavanol content in food using a different analytical approach than the one implemented with the AOAC method. It will also allow for detection of these bioactives with greater selectivity than other methods currently available.

Five years ago, Mars Edge scientists and its collaborators completed research that identified two flavanol biomarkers - measurable changes in the body that occur when flavanols are consumed. When flavanols are consumed, they’re metabolized into numerous other molecules, two of which are known as structurally-related (–)-epicatechin metabolites (SREMs) and 5-(3ʹ,4ʹ-dihydroxyphenyl)-γ-valerolactone metabolites (gVLMs).

These two nutritional biomarkers capture two points of reference which can help us understand how flavanols affect the body. We’ve previously demonstrated a high-throughput method for measuring biomarkers in urine samples.

We found the method had high accuracy and precision and showed that biomarkers that are directly correlated to ingested flavanol content are measured in plasma. This new method is important for the analysis of samples derived from large scale clinical trials, such as COSMOS, as it offers another option to assess flavanol content in biosamples – going beyond urine analysis to uncover a wealth of data in plasma that build the scientific understanding of flavanols mode of action in vivo.

What does this research mean for nutrition research?

These two new research papers highlight the importance of analytics in bioactives and the discoveries that Mars Edge has made to better characterize flavanols in foods, so we know what’s really in the food being researched and can identify potential issues of adulteration. It also helps us to develop biomarkers to assess intake in humans, without depending on self-reported food diaries or nutritional databases - which can include inaccuracies. This will ultimately help nutrition researchers – at Mars and around the world – investigate whether there’s causal link between cocoa flavanols and improved health.